The Pull principle and Kanban

Pull is an important element of logistics in the Toyota Production System (TPS) and means that all delivery processes are highlighted by the customer's needs.

About 100 years ago, the so-called supermarkets appeared in the United States. There were large stores with many goods, and in particular it was exciting to see how they managed the logistics. Barcode and PC were concepts that were not even discussed in science fiction stories at the time. On the other hand, there were simple visual and efficient system solutions: Customers picked their own goods, the goods had their fixed place on the shelves and a defined minimum quantity, and the store constantly ensured that those sold were replenished. One had a "reorder system" or a Pull system. Partly based on this mindset, Toyota developed its Kanban system.

Back then, there were no retail supermarkets in Japan. However, Ohno had heard about these in high school when a classmate made a presentation about his visit to the USA. This included picture of modern supermarkets. He took inspiration (and the name supermarket for the managed inventory) from America for his production system at Toyota. The first implementation of these supermarkets at Toyota was by Taiichi Ohno in 1948. Roser, Christoph. All About Pull Production: Designing, Implementing, and Maintaining Kanban, CONWIP, and other Pull Systems in Lean Production (pp. 7-8). AllAboutLean.com Publishing. Kindle Edition.

Kanban was a Japanese term that meant a card or a signal that triggered a production, activity, or action. When a Kanban signal was triggered, it was because items of the category to which the card applies was needed, i.e., an inventory Kanban, or because capacity was available to cover a demand for an order, i.e., a workload Kanban.

I remember being at a company in the 1990s where they had established a system they called “Faxban”. They had standing two coils with ribbon steel in front of a punching machine. When the coil in the machine became empty, they inserted a new one. At the same time, they went to a fax machine where several forms hung on a knob. Each form was wrapped in plastic, holeed and hung in its place. The form had a picture of the coil in question. It said who was the supplier and fax number to the supplier. Furthermore, a quantity was specified to be ordered and where it was to be delivered. All agreements with the supplier were made at the beginning of the year and the purchasing department handed over to those who operated the punching machine to make calls-off orders through the year. When the operator took down the form, put it on the fax machine and sent it, then a new coil entered the workshop during the week.

Pull with Kanban in other forms

In modern Environment Requirement Systems (ERP) systems, the methodology related to Kanban is entered as a way to manage the logistics or information flow. In grocery, for example, the method previously described from American supermarkets is entered as a way to control the replenishment of goods in the computer systems. This is no longer a physical system, but a digital system in which all movements of the item are recorded. For example, we can use a barcode system that identifies the item, and when a customer purchases the item, this is registered via the barcode when the item is paid. When the quantity is reduced to its defined minimum inventory in the system, a demand is reported backwards in the supply chain for inventory to be replenished.

The Kanban system has also been widely adopted as a whiteboard structure, where the Pull effect occurs for example when a task, or a sprint is moved in when it is started on, and moved to finished, when it is completed. This means that there will be a space available in the "in process" field and a new task can be moved in. Thereby, a Pull effect is obtained by pulling the tasks forward. Kanban boards have become a popular term, based on the Pull principle, and are used both in production, in information, administration and development. Typical of the Kanban system is this signal that is triggered from a need. No tasks are started before the signal is triggered, but as soon as the signal arrives, full priority is placed on carrying out the process that will deliver the signaled demand. When the maximum inventory level of the current item or the capacity of the supply chain in question is reached, new tasks are immediately stopped. 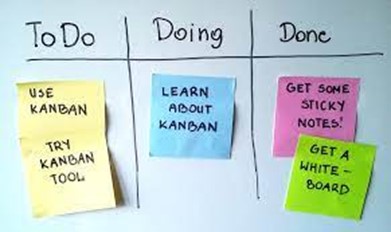 There is normally a difference between Systems that produce for stock and production to order. Producing to stock is most common in logistics and production processes, but it is also a common process to produce to order. In other types of processes such as administrative processes, development processes, management processes and improvement processes it is rarely produced to stock. The principle of carrying out tasks based on not exceeding the workload in the process chain is followed, that means a workload process,

To increase the precision of the inventory limit for jobs of different sizes, it is also possible to limit not the number of jobs or parts, but the workload of these jobs or parts. This is often called workload control. Roser, Christoph. All About Pull Production: Designing, Implementing, and Maintaining Kanban, CONWIP, and other Pull Systems in Lean Production (p. 20). AllAboutLean.com Publishing. Kindle Edition.

In computer programming and development, for example, one has approached this by dividing tasks into sprints. The sprints can be followed up on a Kanban board and carried out as a problem-solving process, or a PDCA cycle. When a sprint is finished, a new one starts. A significant effect of such a Pull system is that we carry out tasks one after the other and the lead time on each task is reduced to a minimum as opposed to if many parallel tasks or batches of tasks are initiated. Batches entails long lead times and is often raised as the main reason why processes cannot flow.

In standard processes in administration, information, management or otherwise, Pull consists of delivering what is signaled as needed at all times. Not pushing solutions and measures based on their own assessment but having deliveries to what the recipients demand in focus, to do an effective job. This is a workload system, but still a Pull System.

In logistics, theories such as minimum inventory or periodic ordering are often used.

In minimum inventory, you have a signal that is triggered when the inventory comes below the minimum. In its simplest form, this can be a physical mark in the rack, or on the floor. For example, the person responsible for the transport can trigger the signal when a device is transported away so the minimum quantity is reached. New supply is ordered by retrieving a fixed quantity from the previous station. In the theoretical model, a safety stock is often common as well, so that one does not risk running out if material requirements that may occur unintentionally. One way of working is to use periodic ordering and review the inventory for example once a week and order new deliveries based on and complete, even if it deviates from a normal Kanban system.

In development tasks and improvement tasks, Kanban boards can be used where the signal comes from workload or inventory. An order is released when there is available capacity to perform the task. When the capacity is finished, no more tasks are released until a task is completed so that a new one can start.

The purpose of ordering, or starting up, tasks based on the Pull principle is to ensure that the tasks and goods are carried out and delivered when they are needed, that it constantly is worked on what is prioritized, and that no resource have many parallel tasks to work on which is a way of working that provides long lead times.

Kanban is Pull, even if it's not full flow

Although kanban is not defined as full flow, it is a good working method for achieving reduced lead times and more efficient production. However, the important thing is that this is a Pull system that ensures, at all times, that the right tasks are carried out at the right time based on a need or a defined target state.

Kanban is The Pull the philosophy in practice, initially related to logistics, but also as a way of working in other contexts. Kanban is based on a signal of a need. It is a customer who has the need, and the supplier's challenge is to satisfy the customer.